Building or Renovating? – Excitement can blind you!

Very often in the excitement of designing and building a new home or even a major renovation there are a couple of things that we notice people often overlook. This is less likely to happen with multi unit projects such as home units or town houses, as in these cases the need to comply with town planning and building regulations gives little choice. In particular, changing things to avoid the 2nd of these mistakes is often very difficult to achieve as a result but it should not be overlooked, as it’s something that can make a good project better.

So what are these two mistakes that can be costly to rectify if you don’t consider dealing with them early? 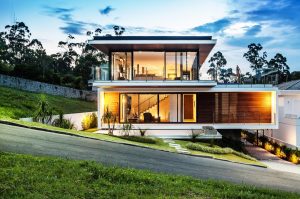 Rarely are building sites absolutely level. Most homes these days are built on slabs which require a level building pad and to achieve this the site is prepared using the cut and fill method. Quite often this will require the construction of retaining walls at some point and we have found that the need for these is often overlooked or down played in the design phase, particularly by many project building companies. Their approach often is simply to get you signed up, with that issue to be discussed at a later date if ever. Very rarely is this cost included in building costs estimates or quotes either. So, we have found that the need for retaining walls is rarely even stressed and given scant regard.

In many many cases retaining walls are best built prior to commencement of building works. Building them later will often result in a much higher cost due to limited access to get building material in or spoil out of the job site. Acess may be so limited that it leads to the inability to use appropriate machinery leading to the need to do things by hand. With the high cost of labour this can add thousands of dollars to the cost of a job that could have been done very simply had it been done prior to the commencement of the main build.

And let’s not forget about the mess and disruption that doing it later can cause if you’ve already moved in, no matter if you are using machinery or just labour.

Another mistake we see, especially with people building new, is that they fall in love with a plan first before giving proper consideration to the aspect and orientation of their land. They go through display villages and become seduced by a particular display or feature and decide that it’s a ‘must have’. The other seductive thing that can, and often does, lead to poor orientation is a great view.

Whether it’s water views, city lights or distant mountains a great view can add greatly to your home’s value though sometimes it can also cause conflict when it comes to good design. What happens when your best view has the wrong aspect? Views offer that ‘wow’ factor so it’s very tempting to design for the view. Should you give preference to view over aspect & orientation?

Have you ever been outside your home but needed to retreat inside because the heat of the western sun beating down was just too much? Or had a swimming pool that was cold and unenjoyable because it was constantly in shade? What about a room inside that was way too hot in summer or cold in winter, doesn’t get a breeze etc? There are many examples of situations that could have been avoided had a little more thought gone into aspect and orientation at the design stage. Designing to your orientation is what maximizes liveability – by making the most of natural light, harnessing the sun for winter warmth while keeping it at bay for summer comfort.

Of course rectifying them later is very expensive as is compensating with things like airconditioning, shade cloth etc. Designing for aspect and orientation can make a huge difference to a home’s liveability. It can also make a substantial difference to a home’s resale value. Julian Parsons of land survey company Site Surveys estimates at least $50,000!

Here at SCM one of the first things we almost always do, and it does depend on the type of project of course, is to recommend a Site Plan. The trick to getting good design, the first step if you like, is to obtain a Site Plan. No matter if you are starting from scratch or renovating an existing home a Site Plan will immediately show the property’s aspect and orientation. In fact, it will also do a heck of a lot more things that will be very useful to the success of your project. It may even help you to add $50,000 or more to the value of your home. Missing out on that is likely something you’ll live to regret later, not to mention less than comfortable living conditions meanwhile.