Home / Building and Renovation / How Long Does It Take to Build a Custom Home?

5 Things That Speed It Up or Slow It Down

How Long Does It Take to Build a Custom Home?

If you are considering buying a home, it might be worth considering building a house from scratch instead. That way you will get a home that is designed to suit your needs and the land in question, taking into account views, best aspect and breezes. That was the decision facing Mark & Karen as their family needs were outgrowing their family home, a Queenslander in the near northern Brisbane suburb of Kedron. For them though, the thought of leaving the area they had grown to love and all the disruption that would cause was not a welcome one. Surely, they hoped, there had to be a better way. One thought was to extend, but that had issues, and would it be worth it in the end? Their block of land is triangular shaped with the existing home occupying the best part which posed a dilemma.

After consulting SCM a potential solution was suggested. Subdivide the property into 2 lots, crafting a Custom Design to fit into the vacant triangle area then build it. But how long does that take?

Don’t get fooled by reality TV programs where you can see a whole house being erected and decorated in just a few weeks, because the truth is so many elements are pre-prepared and you’re only watching the exciting highlights. There’s a lot more happening when the cameras are turned off.

Speaking of cameras, if you’d like to see a 3-minute time lapse video of Mark & Karen’s house that’s featured in the photo above being built then click here. The aerial view towards the end taken from a drone is especially interesting. Of course we couldn’t start the construction until we had created the new lot with a separate title to the older home. And that subdivision [ROL] wasn’t exactly straight forward so did take a little longer than usual. We only had 635 m2 to play with and that was for both homes!

As you can see from the following diagram and aerial view, the existing home occupied the bulk of the land leaving just the pointy end of the triangle to build on. Because the existing home was a pre-1946 Traditional Character Home it had to remain where it was. 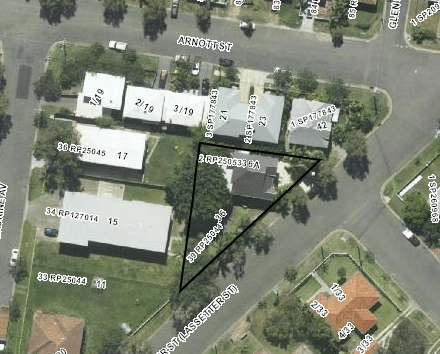 Crafting a well-appointed, custom-designed property in Australia takes between eight and eighteen months on average, all things considered.

We broke ground for the footings for this home at the beginning of May 2019 and completed it mid December 2019, [7 1/2 months] but that was only after buttoning down everything during an extensive design tender and quote process.

If something causes a delay or if you want an over-the-top design or keep making changes it may take longer. So, what are the key factors that can speed up or slow down the process? Let’s have a closer look:

Designing from scratch can take some time to get it right, especially on a site like this one where boundary set back distances were critical, but time spent in the early stages is time well spent.  Having an accurate site survey early in this process is absolutely critical. The length of the entire building process is largely determined by the intricacy of the design and the complexity of the build. Town planning issues can add another complicating layer as they did here.

Keep in mind that larger, more complex houses take longer to complete. If you want something more complex and custom-made, be prepared to wait a little longer for the whole building process to be completed.

Once you have your design all sorted, then we have the Approvals process. This can take as little as 10 days or if Planning Approval is required it could take a few months.

This is an especially important stage of the building process. A solid foundation is everything and depending on the type of land and quality of soil, it may take some time to do all the preparations properly. 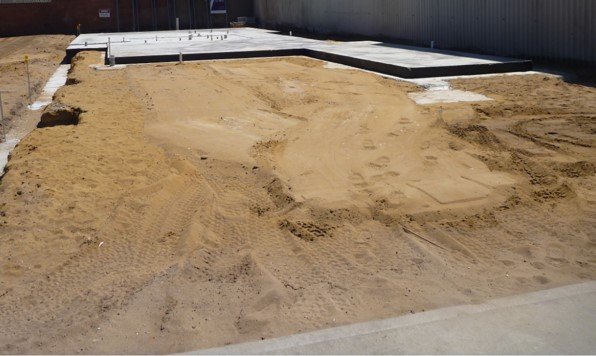 What can this involve? Flattening or leveling the ground, removing vegetation or trees, rock breaking, or even removing reactive soil and replacing it with sand and retaining walls. If retaining is required, it’s advisable to do that prior to building the home so the type and the extent of the retaining will also affect the build times. Again, obtaining an accurate comprehensive site survey early is especially useful and necessary before undertaking any of these tasks. Retaining wall omission was no 3 of the 6 omissions & exclusions [of things you will need] we identified in an earlier blog that builders frequently leave out of building contracts to show a cheaper [unrealistic] price.

[Read what the owners have to say about their new home]

The weather can have a profound effect on the whole building process. Heavy rainfall or strong wind can slow down the build process and cause major delays.

Once the building process starts the amount of changes will affect the build time. All changes to the contract must be done via a contract variation signed by both parties. They frequently add to costs. That’s why the design stage is so important to get right and finalised before construction starts. The more that is locked in from the beginning the faster the build time will be – and you would be surprised how fast a well-planned and organised construction job can move.

As you can see there is no right answer to the length of time to build, but choosing a company with the right building approach is the key, whether it be a new Custom home or a block of units or Townhouses. Multi Unit Dwellings bring different challenges but the same principles apply.

You see, there’s a lot more to building a good custom designed home than simply “building” and this is where so many people make a mistake.

Builders build. They are rarely across all planning legislation, the latest in Hi Tech inclusions or even colour schemes. They are rarely good designers or draftsmen. They are better at a “one size fits all” approach than individual custom designs but that doesn’t necessarily always translate to a proficient grasp of all that is required to pull a project together successfully.

If you have a building project in mind, consider giving Jacon Parry at Subdivision & Construction Management a call to discuss it first. There’s no obligation. Ph: 07 33697779